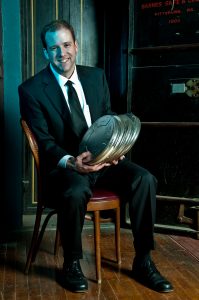 Andrew Rodgers (MBA ’13) originally sought an MBA to change careers. After working in the arts for close to a decade, he thought he should explore other areas of interest.

Wake Forest was his top choice due to the University’s reputation and location, but because his nonprofit employer was not in a position to sponsor his tuition, he was afraid Wake Forest was out of reach.

“Mine was an aspirational application. Maybe if the stars aligned in some magical way, something could work out, but I wasn’t holding my breath.”

The stars did align when he learned from Program Executive Director Kevin Bender that the School of Business had a scholarship program for nonprofit executives. Rodgers received the financial resources he needed to attend when he was awarded the Joel A. Weston, Jr. Scholarship.

“There is no way on earth I would have been able to attend Wake Forest University without the Weston Scholarship,” he said. “As an added bonus, I was incredibly fortunate to get to know Claudette Weston, who helped create the scholarship in her late husband’s name. Her generosity and good spirit are entirely why I got to attend Wake Forest to get my MBA, and I’m eternally grateful.”

Rodgers joined the Working Professionals MBA program, continuing his career by day and studying by night. He worked hard to balance his career, a growing family, and engaging coursework. One by one, he explored his interests and identified the areas that resonated most.

“I realized I went into the arts for a very good reason. It’s what I’m drawn to and what I’m good at. Ultimately, this degree helped me think differently about how I approach my job. My degree made me better at my job.”

As the Executive Director of the RiverRun International Film Festival in Winston-Salem, North Carolina, his MBA helped him perform his daily duties and expand his professional network. “The reputation of an MBA is very meaningful to a lot of the community and business leaders I interact with,” he said. “When folks find out I have an MBA, they understand I have that club in my bag, which is a bit unusual for a nonprofit film festival executive director.”

Under his tenure, RiverRun grew revenues by more than 200 percent, expanding from a small four-day festival to an 11-day international event. RiverRun became an Academy-qualifying festival for animated and documentary short films in 2014.

His success with RiverRun led him to a new opportunity to become Executive Director of the Denver Film Society in Colorado earlier this year. Members of the search committee noted his MBA as a key differentiator during the course of his interviews.

“It’s an organization with a budget approximately five times the size of RiverRun. It’s a big step up for me and my family, and I credit my Wake Forest MBA experience as one of the factors that helped me.”