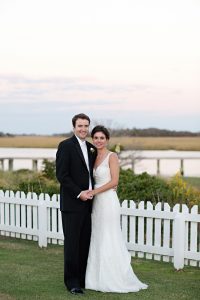 Family. That’s the word that Josh McCutchen (MBA ’09) uses to describe his time at the School of Business. It’s where he found his professional niche, and where he established lifelong connections with classmates and faculty.

“The Wake Forest MBA has given me just about everything in my life. It’s given me my family, my friends, and my job. For that I am extremely grateful.”

Reflecting on his time in the program, he underscored the importance of the expertise he gained from building a team and serving as a contributing team member. He credits these formative experiences as having made all the difference after graduation in his roles at PepsiCo, Delhaize American, and now at Lowes Foods, where he serves as brand manager.

“The skills I learned translated nicely into my corporate experiences,” he said. “Early in my career I realized nothing worthwhile ever gets accomplished in a large organization by just one person. By the time a customer sees your work, many folks have played a part in its success. Understanding how to work with people in different functions, with different priorities, and over whom you have no authority, is paramount.”

A pivotal experience for him was co-chairing the Marketing Summit in 2009 under the guidance of Roger Beahm, (full) professor of the practice and WestRock executive director of the School’s Center for Retail Innovation. McCutchen learned the importance of picking the right team and having good people to work with, from the co-chairs all the way down to the student volunteers. He learned how to open up pathways to success for his team members. That’s how he runs his teams now.

“Working with Roger on the Summit was as valuable as any experience I’ve ever had in my career. I particularly appreciated how he gave the co-chairs autonomy to run the Summit, while providing steady guidance. I still keep in touch with Roger – I consider him a mentor and a friend.”

When McCutchen’s career took him to New York with PepsiCo, he provided a marketing project on Sierra Mist for Beahm’s students. Since returning to Winston-Salem, McCutchen served as a guest lecturer on the role private brands play in Lowes Foods’ growth strategy. Under his guidance, Beahm’s students worked on a strategic marketing plan for the Lowes Foods private brands.

“They raised some good questions – some I hadn’t thought of – and had some good ideas,” McCutchen said. “Having an in-depth, strategic marketing plan in their portfolio will help those students when they start their first job after graduation.”

Because the School of Business made such an impact on him personally and professionally, he said it’s important for him to give back as an active member of the Wake Forest family.

“There’s no shortage of reasons and no shortage of opportunities to stay involved. Not a day goes by that I don’t think about my experiences at the business school and how grateful I am for all of it.”