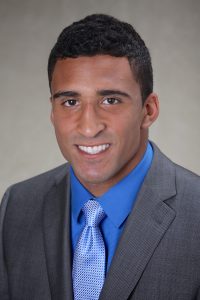 When Ryan Janvion left his hometown of Miami, Florida, he knew one thing: he wanted to succeed.

Four years later, he is poised to graduate with a double major in Business Enterprise Management and Economics and a minor in Communications. At only 22 years old, he is ready to take on the business world while simultaneously training for the NFL and returning to Wake Forest to earn his MBA.

Early on, Janvion realized he could merge his outgoing personality and interest in the inner workings of corporations into a strong business career. “At the end of the day, business is done by people,” he said. “In order to be effective, you must know how to treat people the right way.”

Also invaluable: the current, real-world applications of his classes. He noted that professors like Ben King teach more than just business acumen; they offer life lessons.

“Learning the constructs of a negotiation, the strategies behind getting the best deals, creating win-win situations that optimize results for both parties, and how to empathize with and influence other people – these skills not only apply to business but will help me communicate every day."

Janvion credits his mother and his faith for instilling him with positive habits and attitudes. He’s built on this foundation at Wake Forest, becoming a winner both on the field and in the classroom. He has made the Dean’s list while simultaneously serving as Captain of the football team two years in a row. He was also featured in Poets & Quants for Undergrads’ Best and Brightest 2016.

“I’ve learned that in order to be a true leader, you have to not only do the right thing, but also open your mouth and speak up,” he said. “You have to hold others accountable and call them out when things aren’t right. You also have to be a great teammate and invest in other people to help them become the best they can be. You are going to have to depend on other people to be successful. The best leaders and players make those around them better along with themselves.”