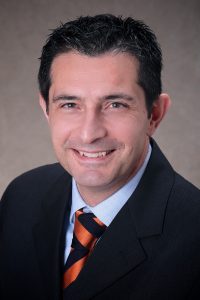 Marco Carbone has devoted more than two decades to mastering the marine industry, from construction and design to auditing and management. He’s continued working in that industry as a consultant with a Fortune 500 company, but when he and his family relocated from Manhattan to Charlotte in 2016, Carbone saw an opportunity to make a turn in his career.

After visiting the Wake Forest University Charlotte Center early the next year, he knew a Wake Forest MBA was his next step. “I was impressed by the staff’s outstanding level of professionalism,” Carbone said. “I found such a great spirit and positive attitude at Wake Forest. Students, staff, and alumni make you feel special.”

The Saturday program in Charlotte has proven to be the perfect solution for Carbone, his wife, an executive at Bank of America, and their two young children.

And he’s already caught glimpses of how he’s growing professionally. The first was while interviewing the CEO of one of his clients during a routine audit last year. “During the discussion I noted how I was using expressions and concepts from the Managerial Economics and Strategy classes that I learned just a few weeks before,” he said.

These daily on-the-job applications pleased him and strengthened his drive. Alumni events have also kept him inspired.

“Wake Forest alumni are so positive, open, and confident,” he said. “The Wake Forest network is one of the reasons I chose this program.”

Carbone is looking to join an international company in Charlotte and eventually secure a general manager position. “Wake Forest is providing me with all the tools and skills I need to get there,” he said. “I am learning concepts and skills I didn’t have before. Strategy, leadership, accounting, economics — I see them as pieces of a puzzle I am building every day. I am starting to see the person I am going to become and I am excited.”

In addition to working and earning his MBA, Carbone also became a U.S. citizen during a naturalization ceremony last winter. By land or by sea, Carbone is poised for success.