Teamwork to Last a Lifetime 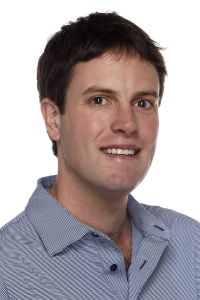 For Blake Jennings (BS ’11), teamwork is everything. That’s an ethic he absorbed during his time at Wake Forest University and it has become a cornerstone of Jennings’ professional life.

“Teamwork is absolutely vital to success in organizations,” said Jennings, director of development at Greensboro-based Biscuitville Fresh Southern. “Group projects in my Business School courses taught me how to interact and learn with people who think about problems and solutions differently than I do. I now see why it is such an important aspect and pillar of the Business School,” he said.

Jennings was drawn to Wake Forest in part because of the encouragement of a personal team of mentors who went to the Wake Forest School of Business and praised the program. Once there, Jennings found instructors who helped him to reach and grow.

Among the professors who left a big impression was Dr. Bill Marcum, associate professor and undergraduate program director in finance.

“Even though his courses were some of the more demanding, he truly motivated students beyond the classroom,” Jennings said. “His ability to challenge students to think outside the box helped me in my previous roles and my role today.”

Outside his coursework, Jennings served as president of the Wake Forest Real Estate Investors Club and interned with Wachovia Private Bank in Winston-Salem. He stays in touch today with friends from those years. “I see my Wake Forest friends on various trips and in my new hometown of Greensboro,” he says. “I love attending Wake Forest football games, where I frequently run into many friends living throughout the country.”

As he reflected on what Wake Forest means to him, it’s clear that much of what Jennings took away from his time at the school transcended the academic — like the philosophy he carries with him in his professional life.

“Surround yourself with people who work hard, and treat others with integrity and respect,” he said. “You don’t need to have the best grades, largest resume, and deepest contact list to be successful in this world. As long as you work hard, treat others as you want to be treated, and take what Wake Forest has taught you, you will find success not only in business but in life.”

Success came to Jennings, in part from the Wake Forest team he turned to in order to launch his career. “I spent my first seven years working for Wake Forest graduates,” he said, “and to be able to put the Wake Forest name on a resume makes a difference.”

In the end, the team you forge while earning a Wake Forest degree will be the team that helps you once you leave the University doors, Jennings said. “If you just take the contacts you have at Wake Forest — friends, professors, etc. — you will find that the Wake Forest network reaches much farther than you could imagine,” he said.