This is Capitalism: The Only Way Entrepreneurship Works

Insights from Warren Stephens, President and CEO of Stephens, Inc.
2017-18 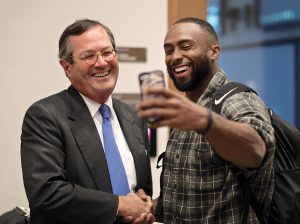 “You come to work, work hard all day, and go to bed with your reputation intact. Then you have the chance to do it all again the next day.”

Warren Stephens (MBA ’81) shared this advice from his dad with students, faculty, and staff in Broyhill Auditorium.

The president and CEO of Stephens, Inc., one of the largest privately held investment banks in the country, was on campus at the invitation of the School’s BB&T Center for the Study of Capitalism. His talk, “The Only Way Entrepreneurship Works,” was a conversation with Jim Otteson, the center’s executive director. In Stephens’ opinion, capitalism is an essential factor.

“Helping businesses grow their business is one of the most rewarding things we do,” Stephens explained during the talk. “Finance is a noble profession. In my firm, we are matching those who need capital with those who have capital, to expand their plants and to grow their business. Without that intermediary role, there would not have been as much success as our economy has had.”

But it is the economy’s success, or lack thereof, that has young people turning away from capitalism, as Stephens suggested in a Wall Street Journal essay. He noted a Harvard survey that showed half the respondents between the ages of 18 and 29 do not support capitalism.

“They haven’t seen a robust economy,” Stephens said during the conversation. “We had the recession and then a weak recovery. What they have seen is a complete meltdown, federal bailouts of various entities that look like, and probably are, crony capitalism, which leads to criticism. I don’t think they’ve seen the benefits of a robust economy.”

When it comes to hiring, Stephens said he felt today’s graduates are even more prepared for the business world than he was when he joined his family firm. “I like to look for students who have broadened their perspectives. There’s something to be said for a liberal arts education coupled with business or finance. You’ve got to have something to talk with people about, to have some interest and some basis to establish a connection.”

During the question and answer session, Master’s in Management student Noah Merkousko asked Stephens his reaction to being named CEO at age 29.

“I was overwhelmed,” Stephens replied. “I was 29, and the people guiding me were in their 60s. In hindsight, I should have been a little more aggressive. I was reluctant to go into a 55- or 60-year-old’s office and say here’s what we need to do. But I learned that sometimes a pair of fresh eyes is good.”

Stephens’ answer made an impression on the student. “I learned the perspectives of a CEO, specifically on how free markets work,” said Merkousko. “I appreciated the down-to-earth, applicable advice he gave.”

Learn more about the “This is Capitalism” initiative advocating for capitalism by visiting www.thisiscapitalism.com.