What do you get when you combine three Wake Forest School of Business students who share a passion for sports and data? A new game-changing tool for Wake Forest football.
2018-19

Using descriptive analytics and applying what they are learning in the Master of Science in Business Analytics program, Muhammad Ammar (MSBA ’19), Andrew Bowers (MSBA ’19), and Sebastian Fischbach (BA ’18, MSBA ’19) developed a tool to assist Associate Athletic Director of Communication Steve Shutt and his team’s efforts to enhance the game experience.

Ammar and Fischbach were inspired by watching a TED Talk in class about predictive analytics in basketball, but they needed a third player on their team. Fischbach recalled meeting Andrew Bowers during MSBA orientation. Bowers majored in data analytics and statistics at Virginia Tech and had recently attended the MIT Sloan Sports Analytics Conference. He was a natural fit for the project.

With their team assembled, Fischbach, who ran cross-country and track and field for the Demon Deacons, leveraged his network within the athletics department to approach Shutt with a proposal.

The task was a daunting one. In the 12 years Shutt has been at Wake Forest, the athletics communications team has conducted a large amount of football statistical research.

“We’ve been trying to put together all the statistics from every football game that Wake has ever played in going back to 1888,” Shutt said.

Statistics are crucial to the game experience and the communications team’s interactions with the broadcast announcers and the media.

“When you hear the announcer on television say ‘this is the first time this has happened against this opponent in 80-plus degree weather,’ that’s what Steve wants to know,” explained Bowers.

The challenge for the MSBA students was streamlining the data to be more reliable and easier to pull during the game.

“Steve is a powerhouse of statistics, but the way he gets them is he looks at a bunch of different Excel spreadsheets that he has kept throughout the years,” added Ammar.

Their first step was tackling the messy data.

“A student had transferred handwritten notes from scanned PDFs into an Excel document but the problem was this spreadsheet was very untidy,” said Bowers. The students moved away from the visually formatted spreadsheets to a format where a statistical software program like R could read it.

“The students integrated all of those spreadsheets into a far more sophisticated stat software that gives us instant access to specific statistics,” said Shutt. “The speed in which they can find that information is lightning fast and that has been a huge help.”

A website now allows the team to query a vast amount of statistics on the football program, saving time and putting the athletics communications team on the cutting edge of providing information to the broadcast announcers and sports media.

During home football games, Ammar, Bowers, and Fischbach sat in the press box with Shutt and assisted with queries based on what was happening on the field. The experience gave the students an opportunity to apply the platform in a real-life situation and refine it as needed.

“We were live coding in the press box,” said Bowers. “It’s the first time I’ve ever coded at a football game. It’s just straight work for the 60 minutes the team is on the field.”

Fischbach said witnessing firsthand how the project impacts the game experience is incredibly rewarding. “It was really cool when Steve asked us a question and we were able to get him an answer and then they used it in the stadium as a stat!”

Taking on an extracurricular project of this magnitude while enrolled in the 10-month MSBA program required the students to become masters at time management, something the students recognize will benefit them in the future.

“In the real world, we’ll have a lot of different tasks that we’re trying to balance. The trick will be prioritizing these projects with our time and understanding what’s due when. This project really helped me understand that,” said Ammar.

They’ve also benefited from applying what they are learning in the classroom to a real-world situation. One of the hallmarks of the School’s MSBA program is arming students with not only the technical skills needed to analyze data but also the presentation skills to help with storytelling.

“We learned technical things in our classes that we try to implement in our project, but we also learn softer skills such as project management and presentation skills,” said Ammar.

At the close of the football season, the students transferred the final project to Shutt. They remain available to assist as needed. Their next play? Searching for ways to customize the program for other sports applications at Wake Forest and beyond. 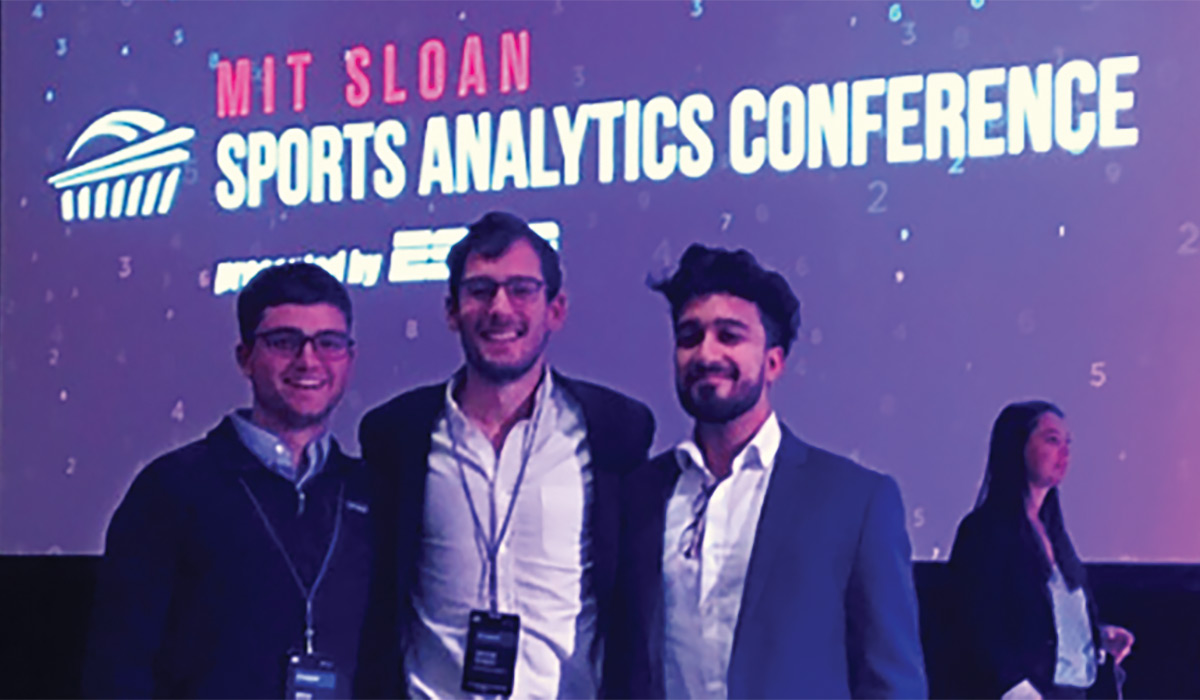 Ammar, Bowers, and Fischbach were also finalists for the 2019 MIT Sloan Sports Analytics Conference Hackathon. They were given Women’s Tennis Association data and challenged to create a digital experience focused on fan engagement. Industry leaders in the sports analytics space served as the judging panel. The Wake Forest MSBA team was a top three finalist for their business solution for user experience.

“We showed how well we can work under pressure and were proud of what we achieved in such a short time,” said Ammar. “We drew on the knowledge we gained in the MSBA program.”

When Associate Dean of Business Analytics Jeff Camm asked the team what their secret was to get to the finals, Bowers replied, “After the initial briefing, almost all other teams began coding immediately. Instead, we tracked down the sponsors and asked questions to make sure we better understood their expectations and requirements.”

Camm said, “This is a cornerstone of our MSBA program ­— defining the problem is the critical step. Like a good doctor, a good analyst asks probing questions that go beyond symptoms to the root cause.”